Backers south for a long ride

A riding jacket more than 100 years old will help raise money to send the Australian equestrian team to the Munich Olympic Games later this year. The colours were worn by the Australian poet and steeplechase rider, Adam Lindsay Gordon, who died on 24 June 1870.

Members of pony clubs in NSW, Victoria and South Australia will carry the jacket on horseback to Gordon’s home town, Adelaide. The NSW Pony Club Association, which arranged the long ride, hopes to raise $25,000 on the NSW part of the journey to Albury.

Each rider who take part will be sponsored on a mileage basis, the money going to the Australian Equestrian Federation’s Olympic Appeal Fund to go towards the expense of sending an eight-man team and their horses to Munich. The NSW branch of the federation is aiming to raise $100,000 towards its share of financing this and future Olympic equestrian teams.

A ceremony to start the ride will be held at Parliament House tomorrow morning.

The owner of the jacket, Mrs JC Blackmore, of Manly, will present it to the NSW Minister of Justice, Mr Maddison,deputising for the Premier Sir Robert Askin. The jacket has been in the Blackmore family for 100 years.

Mr Maddison, will hand the 102-year-old red and black checked [Rob Roy tartan] jacket to Olympic equestrian gold medal winner Laurie Morgan, who will lead 16 riders, under a mounted police escort, to Warwick Farm on the first leg of the 1500-mile journey to Adelaide, where it will be presented to the South Australian Jockey Club.

Edwin Gordon Blackmore (1837-1909) was Parliamentary Librarian when Adam Lindsay Gordon was in the South Australian Legislative Assembly in 1865-66, and the two became firm friends. Gordon trained Blackmore’s horse Lancelot while in Adelaide, and Blackmore also rode with Gordon on the hunting field. In 1869, Gordon travelled by sea from Melbourne to Adelaide and rode Lancelot in the first Adelaide Hunt Club Steeple on 2 October, but did not win a place. Blackmore returned Gordon’s visit, and watched him rider Major Thomas Baker’s horse Prince Rupert in the VRC Steeplechase at Flemington on 12 March 1870, in which Gordon was thrown at the second fence. In spite of the seriousness of the fall, Gordon jumped to his feet, remounted, recovered the lost ground, and led again until Prince Rupert fell at the third fence. This time Gordon was thrown badly. Blackmore came to his help and took him home to Brighton; this was the fall he never fully recovered from. 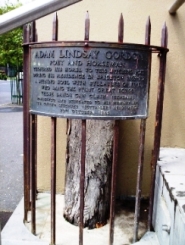 We are pleased to announce that a protective cap has now been placed on the top of Adam Lindsay Gordon’s hitching post outside Brighton’s The Marine Hotel (Victoria) and we thank the Marine Hotel management for providing us with a photo of the cap which was manufactured and installed by Greg Harris of Greg Harris Sheet Metal, Ballarat.

Members and friends have kindly donated $740 to our Hitching Post Fund.

We thank our donors:

The overall cost for metal cap and descriptive plaque was $777.34.